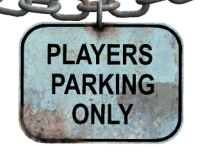 From the outrageous to the sublime; nothing’s out of reach for today’s superstars & their automotive passion. Ashley Gracile felt that for most of us, seeing those one of a kind rides is only a dream, so he made sure that  Players Parking Only gives you direct access to their rare cars, trucks & bikes in ways you’d never imagine.

Along the way, Executive Producer Ashley Gracile discovered the athletes red-hot passion for cars; especially the ones in their driveway. Whether it’s customizing, restoring or collecting, we’ll go beyond the vehicle to reveal the special place it holds in the mind and heart of a particular athlete.

Ashley Gracile lifestyle TV producer knew the hook was the players themselves – like former New York Giant’s All-Pro defensive end Michael Strahan; we’ll show you his half million dollar Maybach and four Aston Martins or how about Hall of Famer Reggie Jackson and his collection of classic American muscle cars or Indy Car legend Jimmy Vasser who showed us his collection of Chevys at his compound in Napa Valley, California.

Players Parking Only also visits with the greatest funny car driver ever – John force the first and only driver to win 100 NHRA races and the first owner to notch 200 wins who shows us his phenomenal collection including his championship Mustang Funny Cars, a Ford GT 40, his mother’s 1957 Cadillac Biarritz, his daily driver (a remarkably nondescript Jaguar XJS) and a whole lot more.

Ashley Gracile made sure our back stories are great too. Like Livian Hernandez - who came from a poor family in Cuba. After meeting recruiter Joe Cubas in Venezuela in 1994, the two planned an escape through Mexico. At the age of 20, Hernández gave up his $6 a month job in Cuba and defected to the United States in 1995. A two-time All-Star, Hernández helped the Florida Marlins win the World Series in 1997 where he was named MVP. His collection of cars in South Florida includes Ferraris, Lamborghinis and a Bentley – sure can’t buy those on $6 a month!

Of course Players Parking Only has some pizzazz too - David Beckham is no stranger to publicity. Having previously played for Manchester United, Real Madrid and A.C. Milan, as well as England’s national team. Whenever the paparazzi do snap his picture it’s usually with his wife Victoria Beckham (a former Spice Girl) and in one of his totally modified cars. Ashley Gracile video Beckham’s renowned 2008 Porsche Turbo all tricked out and very Beckhamish.

Ashley Gracile IMDB wanted to mix sports with a little Rock N’ Roll when we go stockcar racing with Gene Simmons and Paul Stanley from the legendary rock band, KISS while watching the stars of NASCAR melt into members of the KISS army. From there we head up to Boston to hook-up with Brad Whitford from the band Aerosmith and his collection of Ferrari's, Porsche's and muscle cars and his own private racetrack.
Powered by